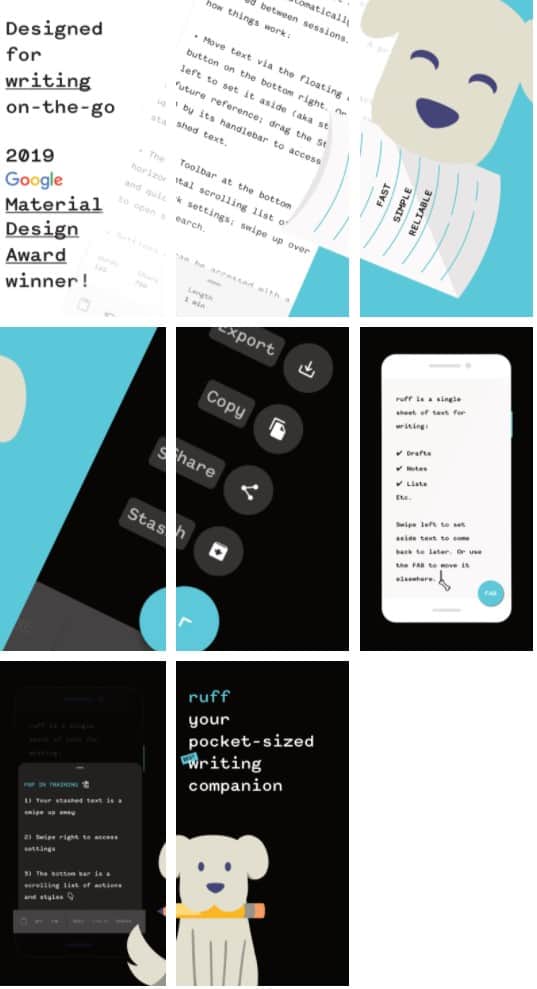 Ruff review. A writing app with personality but lacking in features

There are many unique writing apps on the iOS side, but relatively few on the Android side. But even so, sometimes unique apps like this come out. It's still a bit lacking in functionality, but it's a Ruff with enough personality. Google Play Link

Ruff is a writing app with a unique concept.

The concept of the app is quite unique. As explained in the previous paragraph, there are no more unique apps on Android, so this app stands out. First of all, while preserving the basic parts such as the number of characters, the function that allows you to quickly jump to the previous word or previous paragraph by pressing x1 x2 is also fine.

Unlike iOS, Android has a touch in the middle of words, so I think it's a very necessary feature, but if you use the app a lot later, you can quickly edit the entire document, so I think it could be a good feature. If it was on iOS, I would have thought it would be a pretty good feature, but for Android, I don't think it's that great. However, it is understandable that someday, the app will probably be released on iOS as well.

Besides the interface, the overall concept is a little different from other writing apps. EvernoteI Notion There is no such function to keep and write various documents such as etc. word Send it to others and finally finish the work... It feels like an app made with just this concept. So basically, while writing the draft, you can temporarily save it by doing something called stashed. And the rest of the functions are very concise, keeping the concept thoroughly.

Ruff has a good price, but there are some downsides too.

If it's a writing app these days, to be honest, there should be an automatic backup. However, in ruff, backup is just about moving the user's own writing to the Google Cloud. To be honest, this feature is a must-have feature... Actually, the review I wrote before changing the smartphone disappeared, so I'm writing it again now. just tears...

Another disappointment is that the update is rather slow because it is an app that individual developers make small. Of course, basic and popular writing apps such as Word, Scrivener, and iA Writer do not receive many updates. However, I think ruff is an app that still has a lot of areas to be improved... So, until the app is completed on its own to some extent, the app will need to be updated frequently, which is especially unfortunate.

The Windows version of Ruff has a strong feeling that it is still unfinished.

Ruff also has a Windows version. Although the Android version has some regrets, I still feel that it is made to some extent, while the Windows version is only at the same level of conception and I do not know how the app will work on the surface, but there is no reason to use this friend on the desktop first. I don't know if this is because I didn't use the paid version of Windows, but first of all, I can't link between platforms. Well, in the first place, the backup is just uploaded to the Google Cloud... It must be said that it has not been implemented in the first place.

And the app is originally optimized for touch, so if it doesn't touch like my desktop, the features aren't that great... In conclusion, the Windows version isn't very good.

In conclusion, it is a well-made app overall, and it was an app that won the Material Design Award in 2019 by Google, so I could understand to some extent why. Still, I think it would be better if the developer had more time to manage this app more. Many more features are being added. And, as I mentioned a few times in this article, it could be a much better app if it was released for iOS, and if the cross-platform integration is made more appropriate, it will become a more popular app.