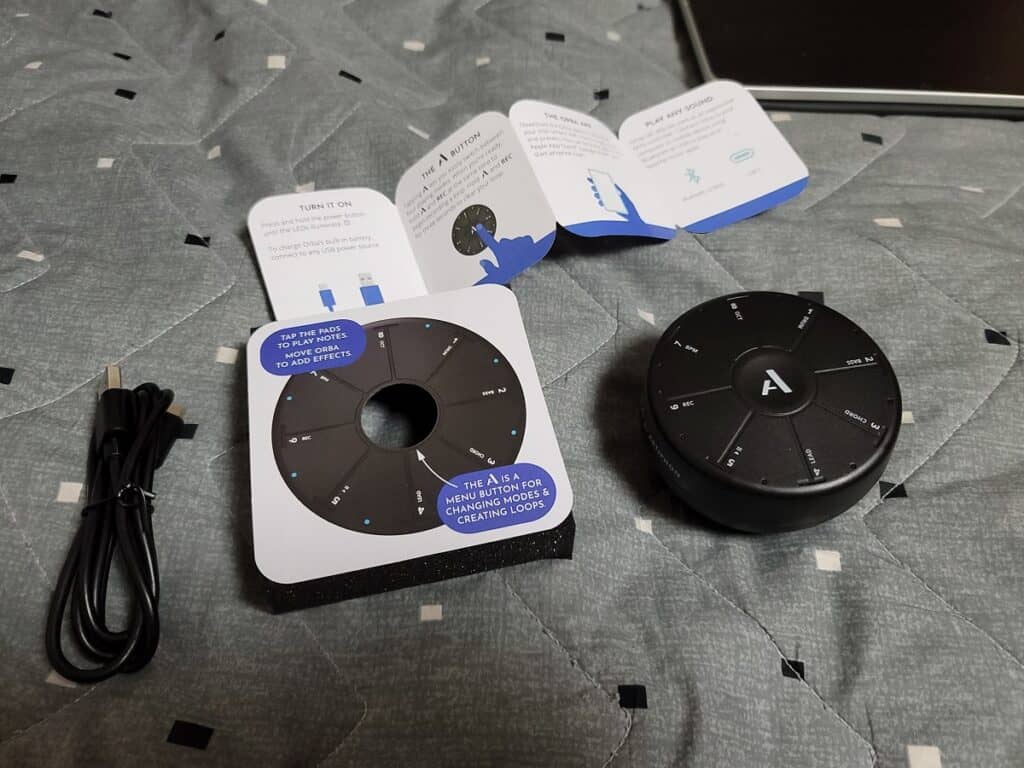 Artiphon Orba Review. a musical instrument with a distinctive appearance and powerful function

There are various types of midi controllers I don't know the details. However, I've seen that because MIDI is old technology and the structure is simple, based on the current standard. It's fascinating just to hear it. Maybe that's why the ROLI Block that I reviewed before are the same midi controllers, but they have unique shapes. Now, this instrument that I'm going to write a review of also has a unique appearance. This is Artiphon Orba.

As mentioned at the beginning of this article, this Orba has a very unusual appearance. It looks like an orange cut in half. I didn't know it was an instrument because it was so pretty and it looks like an orange, so it's the size that you can grab with one hand. For women with small hands, it may be a little small in one hand.

But Orba is not only unique in appearance but also features too many to fit into its small size. First, it functions as its own instrument. There is the Orba app. You can use the sound sources in the preset in the app to make an instrument. There are about 10 now, and updates seem to be intermittent, so there is a possibility that more will be added.

The instrument does not have a screen, but it is made intuitively in its own way. You can play drums, bass, lead, and chords individually by pressing the A button in the middle. And since there is a recording function, you can make music by adding on those instruments one by one, and of course, you can adjust BPM and set the metronome. This means that both synths and loopers are supported.

And as it looks easy to hold in one hand, there are various ways to play. You can play the orba in a variety of ways, such as tilting it sideways, hitting the sides, touching it along the perimeter of the instrument, or pushing it all the way in the middle. So they have the freedom to play. To be honest, I'm kind of disappointed in the intuitive part. But if I get used to the instrument, I think I can play it well.

The price isn't that expensive either. I bought it for about 7~80 dollars. Of course, 7~80 dollars is not objectively cheap, but it is pretty cheap among MIDI controllers. There are a lot of expensive MIDI controllers, and the previous artiphon instrument 1 released by this company right now is almost 3~400 dollars.

Artiphon Orba is good, but there are limitations to the instrument itself

However, this orba also has quite a few drawbacks. First, it is intuitive in its own way, but there is a certain limit to the sound that can be made whether it is the limit of the instrument. And when someone uses it to record, it ended up being about 8 beats, so this part is also disappointing. Personally, I think 16 beats would be great... Of course, I may not have mastered the controls yet.

Another disappointment is that it is not possible to specify or create custom presets. It would be a great instrument if you could at least play the drum with the sample you want, except for the synth part. But I look forward to it because they updated the instruments from time to time. This part has never been updated and seems to be a feature added in the new Orba 2. The people who bought 1 turn into a fool in no time... Usually, there's a 10% discount for the person who bought one, but there's no such thing.

Besides this, as mentioned earlier, the midi controller function is disappointing(but strangely, only the garbage band works very well) and no matter how intuitive it is, there are some limitations when using it because there is no screen. For example, I can adjust the BPM, but I don't know how much it is exactly. If you've made some music, you'll be able to figure it out quickly. Personally, I hope there is a function that does not make a sound when used as a midi controller, but there is no function like this. So when I write it in midi, I have to lower the volume, so it's kind of annoying.

As a company that makes unique instruments, they guarantee fun and individuality

This company seems to make a lot of rather unique and unique instruments rather than making some functionally great instruments. The same goes for this orba, but instrument 1 also looks like a guitar, but it's quite unique Also, they recently made an app that works with Snapchat. I don't know how much money I will make... Still; they have a distinct personality and I like it. I still play Orba from time to time and it's definitely fun. The company's philosophy of wanting to have fun with music seems to be visible.